On the following 2-3 releases we will iterate through some important steps and we’ll be changing the OAuth 2.0 authorization flow. Carefully read the following details and recommendations to avoid future functionality issues.

Please note that these changes will not affect the tracking functionality of the plugin. If you don’t follow the steps bellow, you’ll be probably experiencing reporting issues, meaning that the plugin will not be able to retrieve and display reports inside your WordPress install (frontend reports, backend reports, dashboard reports, and widgets).

To keep GADWP’s API Project credentials confidential, a part of the authorization flow will be handled by a dedicated Endpoint (the GADWP Endpoint). The endpoint is designed to generate access tokens which will be later used by the plugin to request reports from Google Analytics API. With the exception of the authorization flow, all requests will be made, as usual, from your server to Google Analytics API without involving a third-party endpoint or service. 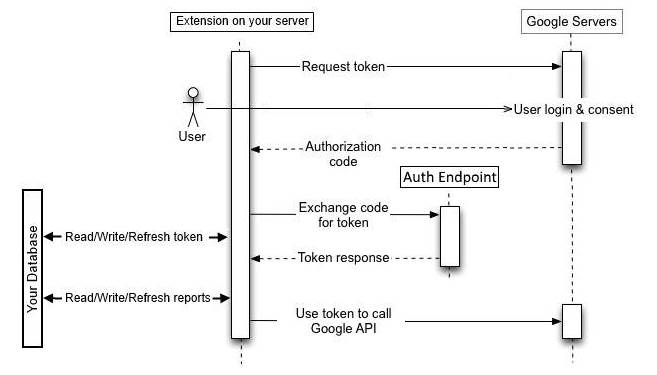 From the very begging, even when releasing major versions, we’ve tried to maintain full backwards compatibility. making the upgrade process hassle-free. Driven by the same principle, we’ve decided to make a graduate switch to the new authentication system. Basically, all new installs will use the new authorization flow, while the old plugin installs will be using the old authorization flow.

During this phase we will be releasing Google Analytics Dashboard for WP v5.2. The upgrade to this version is highly recommended.

During this phase we will be releasing Google Analytics Dashboard for WP v6.0.

During this phase we will disable the old API Project credentials.